A new patient presented to our clinic with complaints of ocular pain in both eyes for the past two months. She is a 63yo AA female who describes it as an achy, throbbing pain when she moves her eyes. She had experienced accompanying blurred vision and increased light sensitivity as well. The patient is living in the state only temporarily as she cares for her elderly mother, and currently has no primary care physician. She went to see a doctor recently in her hometown in Alabama for the same issue and was given Prednisolone drops to use. These never helped and she discontinued them 2 weeks ago.

Upon examination, her entering acuities were 20/40 in the right eye and 20/100 in the left eye with no improvement with pinhole. Her intraocular pressures were 9 in the right eye and 8 in the left. Slit Lamp Examination revealed normal adnexae, 1+ injection of bulbar conjunctiva OU and significant Mutton fat Keratic Precipitates on the corneal endothelium in both eyes. The anterior chamber had a 3+cellular reaction and the vitreous had a cell with snowbanking in inferior pars plana region in both eyes as well. The patient was diagnosed with acute, bilateral granulomatous anterior and intermediate uveitis. She has no systemic disease and takes no medication. Upon further questioning, she has no positive symptoms on the uveitis questionnaire. She was started on Pred Forte every 2 hours in both eyes and cyclogyl once a day. The nature of her uveitis, bilateral and granulomatous, gives high suspicion for systemic disease and the patient was sent for a chest x-ray and several blood tests to rule out various conditions. The tests included a CBC with differential, ESR, ANA, RPR, HLA-B27, Lyme titer, ACE, and serum Lysozyme.

Over the next few weeks, the patient responded to the topical steroids and continued to show signs of resolution. Her vision returned to 20/20 in both eyes and her symptoms improved. The test results were negative outside of an abnormal chest x-ray and elevated ACE and serum Lysozyme. The results of the chest x-ray revealed bilateral hilar lymphadenopathy and a chest CT scan was recommended for a more detailed look at these abnormalities in the lungs. The abnormal lymph nodes, or granulomas, seen on chest x-ray represent where infection-fighting white blood cells have formed in the lungs and is often the first indication a disease known as Sarcoidosis. The chest x-ray is abnormal in about 95% of those who have the disease. Agniotensin-Converting Enzyme (ACE) is secreted in large amounts by cells that make up granulomas. Ace levels are often high in patients with Sarcoidosis but the blood test is not entirely specific to the disease. Along with her abnormal test results, the patient’s demographic profile also makes Sarcoidosis the most likely etiology of her ocular disease. She was notified of the results and encouraged to locate a primary care physician who can perform the CT scan and manage her systemic disease, if indicated, while she is living here in Ohio. 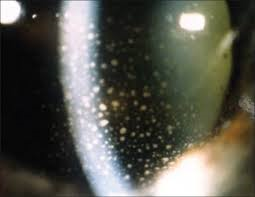 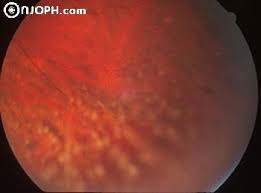 We will continue to monitor the ocular inflammation and will maintain topical steroids until there is a resolution. This level of inflammation can often require several months of steroid treatment and in some cases, intravitreal or oral steroids are needed to eradicate the vitreous inflammatory reaction.